After 200 years of commentary in medical journals, only cerclage (practiced in various forms for more than 100 years), and a few more recent and highly controversial pharmaceutical treatments (which Payers are now rejecting), exist to address this crisis.

However, cerclage is a costly and invasive surgical procedure, which offers treatment for only a small patient demographic, and generally only for a very narrow period of time during pregnancy (amounting to rescue and emergency treatments). Like the controversial pharmaceutical treatments, cerclage has no proof of efficacy and, on average, costs Payers more than $20,000 per patient. 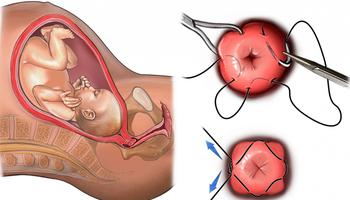 The Promise of CSD:

Our globally patented CSD offers the first and only non-invasive, medication-free, preventative treatment designed to support a successful and natural birthing event by addressing a wide range of antenatal, perinatal, and prenatal conditions known to contribute to PTB (and PROM).

Substantially avoiding contact with the delicate and reactive cervical tissues, CSD retains the developing infant by supporting the uterus approximate the cervical fornices; such resistance extending to the structures of the pelvic floor, while avoiding related vascular, organ and tissue interruption (thereby significantly reducing bearing and transverse forces acting upon the cervix that contribute to biophysical stimuli which act in unison with biochemical processes to accelerate dilation and effacement).

CSD will be cost effective to produce and is made of proven bio-compatible materials. It is foreseen that the devices will be distributed in Patient Kits, ranging from about $2000 in mature populations to between $900 and $250 in developing and ‘rest-of- world’ populations (where ViaTechMD is also committed to establishing philanthropic outreach programs). CSD has an extraordinary proof of efficacy foundation, and very strong Payer motivation is expected in addressing reimbursement policies.

CSD is intended to be used to isolate and protect the cervix, so as to mitigate biophysical stimuli which along with biochemical factors work together to ‘excite’ the dilation and effacement process. To accomplish this, CSD is designed to support the uterus approximate the cervical fornices to redirect and dispose the bearing forces generated by the developing fetus upon the more resilient and less ‘reactive’ structures and tissues of the vaginal wall and pelvic floor, while also accommodating surrounding organ and vascular function.

The relationship between biophysical and biochemical stimuli and processes has been well studied and documented. Moreover, the ability to effect a slowing of the effacement and dilation process in attempting to prevent PTB has also been well researched and practiced. However, to accomplish this, the use of highly controversial pharmaceutical treatments has been required. While the pharmaceutical entities have assured practitioners and patients that these drugs are safe and can have no ill effect on the developing infant, there is little to support such claims; therefore, and since all such treatments lack proof of efficacy, Payers are now rejecting these methods.

Nevertheless, it is the proven and well researched / documented relationship between biophysical and biochemical stimuli which drive the effacement and dilation process that supports the CSD treatment thesis; as does the science and logic of very simple, straightforward physics and biomechanics.

While the exact proportion of influence biophysical versus biochemical stimuli have upon the effacement and dilation process may not be refined from the mountain of related data (which the medical community openly admits to being of such size as to be overwhelmingly confusing, even as year after year more studies are undertaken adding to the same), it is clear that together these factors are most prominent.

Controversial as pharmaceutical treatments are, they have nevertheless demonstrated with good certainty that by altering the body’s biochemical processes, some number of patients can expect to delay the birthing event (all risks aside).

From a biophysical perspective, it is this author’s opinion that ‘physical factors’ may indeed be paramount. For example, it is the bearing forces (e.g.: resulting from the developing mass of the fetus and amniotic fluid) weighing against the ‘softening’ tissues of the female reproductive system ('et alia') which act to expand, re-position, and force organ and tissue compliance during pregnancy in preparation for birth.

When, for example, a cervix is too ‘soft’ there can be dire consequences (including PTB and PROM). On the other hand, a cervix that is more robust may need ‘urging’ during delivery. It follows then that as bearing forces acting upon the cervix are reduced, the ‘transformation’ will be slowed; just as when the biochemical process is interrupted by pharmaceuticals to the same effect.

It is also well known that the cervix, an organ-like structure, is highly reactive and plays a role in signaling the body’s biochemical responses during pregnancy (adding to the risks associated with cerclage, since in some cases the ‘over-stimulation’ caused by the procedure can provoke an instantaneous birthing event). It is for that reason that CSD is designed specifically to avoid contact with the cervix while also greatly redirecting / reducing the bearing forces acting upon its delicate and reactive tissues. This is accomplished by engaging the cervical fornices, in opposing the weight of the uterus, developing fetus and amniotic fluid contained therein.

The cervical fornices, much more resilient tissues which surround the intravaginal cervix, consist of two lateral fornices and one anterior or posterior fornix. It is there where the structure and tissues of the uterus converge with those of the vaginal wall; a short distance from the external orifice of the uterus. The recess behind the cervix is known as the posterior fornix, while the smaller recesses in front and at the sides are called the anterior and lateral fornices. These areas are the point of contact at which CSD engages the upper most tissues of the ‘vaginal vault’ in opposition to the bearing forces.

In opposing the bearing forces, CSD then lightly engages the vaginal wall (which is also more robust than the cervix), so as to limit transverse forces which might act to open / widen the cervical os and cervical canal, then extends downward to rest upon the structure and tissues of the pelvic floor.

The highly compliant seat portion of the device, spreads the forces over a wide base with minimal interruption of surrounding organ and vascular function, while presenting a more rigid central structure (isolated from body tissues), which maintains the proper form and function of the device. This central structure also provides line-of-sight viewing of the cervix and cervical os, as well as a proper aeration and drainage pathway.

The amniotic sac, which is often referred to as the ‘bag of waters’ (BOW), consists of a pair of thin transparent membranes; the inner membrane (amnion), contains the amniotic fluid and the fetus, the outer membrane (chorion), contains the amnion and is part of the placenta. On the outer portion, the BOW is connected to the yolk sac, the allantois, and the placenta (through the umbilical cord).

The BOW holds a developing fetus within the uterus until shortly before birth. In a normal birth, as the effacement and dilation process progresses, the bearing forces upon the BOW will eventually exceed the limits of their ‘mechanical properties’ as the cervical canal ‘widens’ exposing an unsupported span. This widening then helps to focus the bearing forces upon the BOW approximate the increased span of the cervical canal, until the tissues' properties are exceeded (when their rupture occurs, in order to allow passage of the fetus). There are about 24 hours from the time of the rupture (which also causes the expulsion of the sterile amniotic fluids), in which to treat the patient and / or successfully complete the birthing event before the risk of serious infection becomes a concern.

Unfortunately, a ‘normal’ birth is not always what must be considered. As CSD addresses, there is a wide range of antenatal, perinatal, and prenatal conditions that can lead to PTB, several of which may also involve Premature Rupture of Membranes (PROM), meaning a BOW rupture occurring before 37 weeks gestation. Moreover, conditions such as ‘compromised tissues’ (including genetic, induced and infectious causes), can result in Prolonged Rupture, when the BOW ruptures more than 24 hours before the onset of labor. Patient care at this point becomes critical, while unfortunately inaccessible to most of the world’s population.

Even in the case of those conditions which may indicate cerclage, or other even more controversial pharmaceutical treatments (none of which have proven efficacy, and which are accessible only to a very few), the risk of PROM is not eliminated. ​In contrast, CSD addresses all these conditions (and more), promising to greatly reduce the occurrence of PTB and its resulting mortality, while markedly reducing the incidence of a wide range of morbidity suffered by those surviving PTB and PROM.

Again, at a most fundamental level (beyond addressing more specifically the wide range of maternal conditions which may ‘invite’ accelerated effacement and dilation, thereby risking PTB and PROM), it is the bearing forces acting upon the BOW (ultimately to exceed its physical capability in retaining the fetus) which cause the rupture. Therefore, there can be no doubt that reducing and redirecting those bearing forces will extend the integrity of the BOW and delay the birthing event (less the consideration of additional ‘off the bell curve’ matters).

While during the effacement and dilation process CSD does not bridge the ‘increasing span of the cervical canal’, it will certainly reduce the bearing forces upon the BOW and cervix significantly; this acts to redirect the pressure from the immediate area of the fetus’ contact with the BOW, disposing those forces generally upward and laterally over a wider area of tissue so as to reduce / eliminate any such area of concentrated force which might lead to PROM. It is by this same ‘mechanism’ that the bearing forces stimulating the cervix itself are reduced to slow the effacement and dilation process from early on (in the wide range of cases where the use of CSD will be indicated).

During late stage fitment, in extreme cases (‘emergency and rescue’), it may be necessary to position the patient more than once to ‘resettle' the fetus, as the device is gently brought into position and to the desired level of inflation / resistance. It would however be unfortunate to find a patient in this condition, since in a very large number of cases, indications would be such that CSD could / should have been in place long before such extremes had developed.